The Chronicles of Narnia

The Chronicles of Narnia

The Chronicles of Narnia is a series of seven fantasy novels for children written by C. S. Lewis. A classic of children's literature, it is the author's best-known work, having sold over 100 million copies in 41 languages.[1][2] Written by Lewis between 1949 and 1954 and illustrated by Pauline Baynes, The Chronicles of Narnia have been adapted many times, for radio, television, stage, and cinema. In addition to many traditional Christian themes, the series takes characters and ideas from Greek and Roman myths, as well as from traditional British and Irish fairy tales.

The Chronicles of Narnia present the adventures of children who play central roles in the unfolding history of the fictional realm of Narnia, a place where animals talk, magic is common, and good battles evil. All of the books, except The Horse and His Boy, have as the main characters children from our world, who are magically taken to Narnia, where they are called upon to help the lion Aslan save Narnia.

I have read the first two books, and to tell the truth I'm shocked. While the first book was simply bad written, the second was blatant propaganda of religious extremism. If you don't want your children to end up shahids, don't allow them to touch this book. — Hellerick 12:42, 18 March 2009 (UTC)

This is an excellent series of books. It's pretty much the only series I read and own. I've learned a lot from C.S. Lewis's work, and the Chronicles puts many good lessons into entertaining stories. The only book I somewhat disliked was Prince Caspian (a little bit boring), but it all makes sense after reading the whole series. Great books! -FlagFreak (talk) 14:20, 18 March 2009 (UTC)

I'd recommend this series as modern classics of children's literature. Christian themes are strong throughout the series, although I think C.S. Lewis never maintained these stories were entirely allegorical. The children who are the main characters are well portrayed - they sometimes get things wrong, make mistakes, or are deliberately mean. The morality is strong throughout the series. Several of the books feature spirits of trees, water, the earth etc. which are drawn from Greek mythology rather than Biblical / Christian tradition - this could serve to confuse uninformed readers, so the books should not be seen as a clear presentation of Christian message.

My favourites are The Lion, the Witch and the Wardrobe and The Voyage of the Dawn Treader. Prince Caspian is by far the weakest, in my opinion.

By far one of the best series of books I have ever read, if you haven't read these books you must read them! Entertaining, exciting, adventure-packed, and filled with many moral lessons. Prince Caspian is a long way behind the other books. My favourite of the seven is The Voyage of the Dawn Treader, followed by The Lion, the Witch and the Wardrobe.

I liked them all but Prince Caspian was not very good.

A really good series. My favourite book is The Voyage of the Dawn Treader. I like Prince Caspian, although it isn't my favourite. My worst is The Horse and His Boy. Brilliant series!

These books are wonderful, and though these are children's books and the first few are very simply written, I'd recommend them to anyone who like imaginative works. Most people will like them, unless they're prejudiced against morality or any hint and form of Christianity.

I have read all the books and I liked them all very much.

I have found these books to be a wonderful gift to the world of reading. While so many books in the current day and age foster over acceptance of mixed morality and political correctness, these books show a strong sense of right and wrong and good and evil. Something our children need to understand in the world of today, which turns a blind eye to these issues and embraces a whatever feels good, do it attitude. They are books to teach by.

My favourite book of the series is The Voyage of the Dawn Treader. The Horse and His Boy is my least favourite but they are all very good. I really like listening to them on CD as well. I love the different sides of the White Witch and her army and Aslan and his army. They have really good voices on the CDs. Once I read all of the books in one go. That was really fun and challenging. (Olivia Age 14)

I read them a while ago and I must say that these are beautiful books and one of my favorites. My favorite books are: The Silver Chair, The Magician's Nephew, The Horse and His Boy and The Lion, the Witch and the Wardrobe. My least favorite is The Voyage of the Dawn Treader.

The Chronicles of Narnia were actually among the first chapter books that I read as a child, though I've re-read them many times since. The writing is excellent for children of an appropriate age range; they are considered classics for good reason. Since the religious/moral angle has attracted a lot of attention, and since the books in the series have diverse narratives, I'll focus mostly on appropriateness of different books for different audiences in my review.

As a disclaimer, I may be unusual in two ways. For one, I first read these books at an unusually young age (5-6 years old). For another, although I was raised in a Christian (Protestant) church, I drifted into atheism over time (something which these books neither helped nor hindered, except that in a vague sense they were part of what made me feel positively about Christian culture). So consider the review in that light.

Books in the Series

In total, C. S. Lewis wrote seven Chronicles of Narnia. There is much debate over what order the books should be read; some people suggest reading them in chronological order, while others suggest publication order. See the illustration below for the differences. 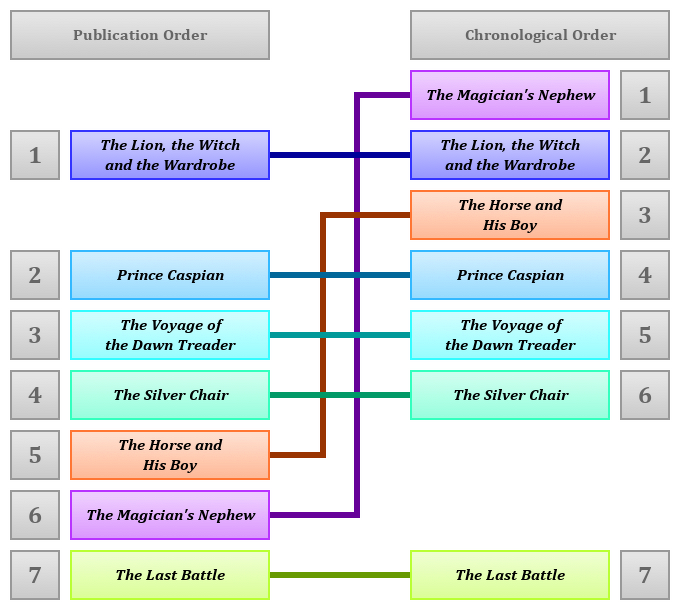 Narnia is a fantasy world inhabited by lots of strange creatures, including Witches, Giants, Boggles, Minotaurs and others.

Magic is present throughout the series, with the "only way" to get to Narnia being by magic. In The Magician's Nephew and The Lion, the Witch and the Wardrobe Jadis, also known as the White Witch, uses magic spells for her own ends. In The Silver Chair, the Lady of the Green Kirtle uses magic spells as well. The whole world is said to be governed by magic, and the "deeper magic from the dawn of time" is mentioned in The Lion, the Witch and the Wardrobe.

In three books there are spirits of trees and waters, with some from Greek mythology.

There is a fair bit of fighting in all of the books, but not graphic and rarely described.