Children's Books Wiki
Register
Don't have an account?
Sign In
Advertisement
in: Articles with an excess of redlinks, Comedy, Just William,
and 8 more 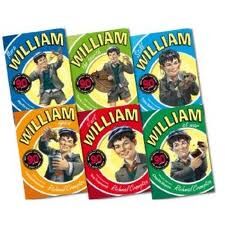 The Just William series is a series of thirty-nine books written by English author Richmal Crompton. The books are based around the mischievous schoolboy William Brown.

The series was published over a period of almost fifty years, between 1921 and 1970, but throughout the series the protagonist remains at the same eleven years of age. The first book was Just William, and often the entire series is named after that book. Each book, with the exception of Just William's Luck, was a collection of short stories.

The series has spawned various television, film, theatre and radio adaptations. It also has a large fan following, with such groups as the Just William Society.

The series has also become associated with the voice of Martin Jarvis, who records all the Just William stories for the BBC. There are currently 10 Just Wiliam collections available on Cassette and CD.

William Brown is an 11-year-old mischievous middle-class school boy who lives in a village between the fictional towns of Marleigh and Hadley in England.

William often gets into trouble and is the leader of his band of friends, known as The Outlaws, with his best friend Ginger, and his other friends Henry and Douglas. His scruffy mongrel is called Jumble.

A William story often starts when William or the Outlaws set out to do something — put on a play, collect scrap metal for the war effort, look after Violet Elizabeth Bott for example. William always manages to get into trouble with his parents, although he can never see why. Often his well meaning efforts result in broken windows and hysterics among Mrs. Brown's friends.

Sometimes William can be very moral — he is inspired to tell the truth for the duration of Christmas Day in William's Truthful Christmas (Still William) with terrible results:

[William has just received a geometry set and a book on church history for Christmas.]

"Did you like the book and instruments that Uncle and I gave you?" said Aunt Emma brightly.

"No," said William gloomily and truthfully. "I'm not int'rested in Church History an' I've got something like those at school. Not that I'd want 'em," he added hastily, "if I hadn't em."

"William!" screamed Mrs. Brown in horror. "How can you be so ungrateful!"

"I'm only being truthful...

The books within this series often reflected current events within the 20th century. William the Conqueror, for example, reflects pre-World War I imperialism, while 1930s books like William The Dictator dealt with Fascism, and 1940s books like William and the Evacuees were set against the backdrop of World War Two. Later on, William and the Moon Rocket and William and the Space Animal were written during the space race. Despite the changing events, William and other characters do not age and become more and more old fashioned when compared to the age they were written in.

The books were originally written for adults, but now are read by children and adults alike. They were intended to be funny.

These stories had me laughing out loud when I was young (about 12, I think). Now my son is enjoying them and I'm laughing again with him. The audiobook recordings by Martin Jarvis are very good too. He captures the essence of William's character extremely well.

Very funny books. I love listening to them on CD.

Very funny to listen to them on cd by Martin Jarvis.

Books in the series

The hero William Brown does not always do "right" things. He sometimes is cruel to animals (like painting his cat blue for a circus). Other times he steals things (but always with the intention of putting them back) and sometimes unintentionally destroys his family's possessions. He also goes into his brother's and sister's rooms and ransacks them looking for something (like plans of airports, to see if his brother is a secret spy). He frequently trespasses on private property.

Despite all this, the William stories are essentially morally sound. There's a clear sense of right and wrong, and although William and his friends are often in trouble, the books do not really condone the wrong things they get up to.