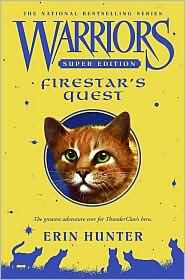 Firestar's Quest is a novel in the Warriors series, written by Erin Hunter. The book is known as a "Super Edition"; it is twice as long as a normal Warriors book, and it is also not part of the usual six-book arcs. Chronologically, it bridges the gap between the original six-book series and The New Prophecy. It is narrated from Firestar's point of view, as were the first six books, but unlike The New Prophecy. The book also reveals several plot features that were not explained in The New Prophecy, such as Longtail's loss of sight. It contains the prophecy that later became the subject of the third six-book series, Power of Three. A second Super Edition, Bluestar's Prophecy, was published in 2009.

There is peace at last between the warrior Clans, and Firestar is proud of the strength and unity of the cats he leads in ThunderClan. All four forest Clans are thriving, training new warriors and keeping their boundaries without conflict. But Firestar's dreams are haunted by wailing cats fleeing a terrible disaster. Firestar is faced with the hardest decision of his life. Can he really turn his back on the forest that has become his home and embark on a perilous quest to discover a dark truth – one that has been buried beyond the memory of living cats? Whatever he finds at the end of his journey, he knows that nothing can ever be the same again.

There is quite a bit of violence in the fighting scenes.

The Cats believe in "StarClan" which are their the spirits of their ancestors watching over them. The cats also receive dreams and prophecies from StarClan.